The Pilot and the Puck-Up by Pippa Grant 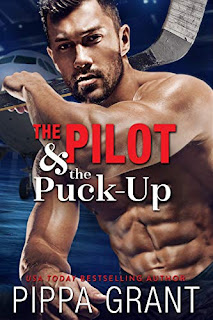 We need to talk about this book. Mostly because it is part of the BBA Book Club this month, but also because I'm co-hosting the discussion about it. 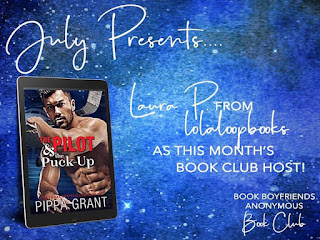 Join us at 8pm EST on August 1st for
a chat about the book!
Description

He’s the biggest, baddest, most spider-fearing motherpucker on the ice…When you’re named after the king of the gods, the world expects certain things of you.Tough? Damn right.Smart? Don’t let the hockey uniform fool you.Large and in charge? Honey, I’m the biggest, baddest, mother pucking-est machine to ever own the ice. I shoot. I score. In and out of the rink. I don’t come early, but I come often, if you know what I mean. And I always leave the ladies wanting more.Until that chick last night.I’m no one-thrust wonder, and you’re damn right I’m going to prove to her I can do better. But every time I think I’m finally on my way back into her pants, she one-ups and out-balls me.I should cut my losses, lick my wounds, and walk away.But Zeus Berger doesn’t walk away from anything.Especially when she's the only woman in the world who might be able to handle me.

The Pilot and the Puck-Up is the first in the Thrusters Series by Pippa Grant. It follows members of the Thrusters professional hockey team out of Copper Valley (fictional town in VA). There is also a series about the baseball team (Fireballs) which is excellent as well (I recently reviewed The Grumpy Player Next Door). It is part of a series but they are standalone books, which I appreciate.

Here is why I love this book so much (and all of the Thrusters books, really): humor, romance, sports stuff, feels, and pranks. Zeus is a big dude with a big personality. The first time you see him he's fitting himself into a tight dress as part of a bet. It's like he HAS to do something if somebody challenges him to.

Joey is a badass. There is no other way to describe her. She's also just so cool that you can't help but love her. And it is that attitude and ability to beat Zeus in everything that gets his attention. He likes the challenge and how tough she is.

Zeus has an.. issue in his pants the night they meet and after that things continue to go wrong for the poor guy. But luckily for him Joey likes that he keeps trying. She wants him to win her over because she wants to know that he's worthy of her time. I can appreciate that, especially since Joey has walls up since her mom ran out on their family when she was a kid.

Not to mention the audio book is great. Erin Mallon and Jason Clarke do a great job, and I love that Erin reads the female voices and Jason reads the male. The back and forth with the 2 voices makes it that much better.

This book is free to read on KU.