The final book in this series just came out so I feel good about recommending it now because there is nothing more I hate about a series than waiting for the next book to come out. When I read a series I like I want them all... RIGHT AWAY! 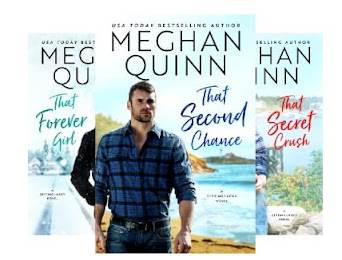 This series by Meghan Quinn is about four brothers who have an incident in New Orleans and are cursed to have terrible love lives until they mature by a tarot card reading, scary looking lady. There was wind and everything. Each book deals with a different brother and they're romance books so obviously they have their ladies.

That Second Chance is about Griffin who is still dealing with the loss of his wife when he meets Ren through an incident with a moose.

That Forever Girl is about Rogan who sees his ex girlfriend again for the first time in years. It was a really bad breakup but I loved Harper and still liked Rogan even though he was a jerk to her for the first part of the book until he gets his shit together.

That Secret Crush is about Reid who is still dealing with the loss of his restaurant and even though Eve is his best friend and former business partner's sister, he still has feelings for her. It becomes a mess when Eric finds out what is going on.

That Swoony Feeling is about Brig and his constant search for love, but he's so focused on finding "the one" that he completely overlooks Ruth. She wants to open a business next to him so they start spending more time together, but Brig is convinced that the girl he is writing in the secret summer of love pen pal program is "the one." This heroine is the only one I had an issue with, because everything she does is because of her parents, from her food to her businesses. It made it difficult to know who she actually is because it doesn't feel like her personality is actually hers, just a mix of the things her parents did and liked. But that said, I loved that adorable idiot, Brig.

The writing is hilarious and I love the text exchanges between the siblings. There were multiple times I laughed out loud while reading these books. Bonus, they're all on Kindle Unlimited, so if you have it you don't have to buy the books to read them, but I liked them so much I bought them all anyway and pre-ordered the last two!