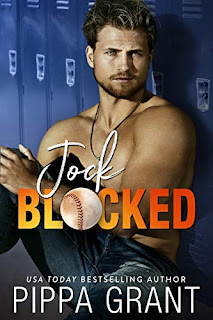 
She can’t let him score...
Call it superstition, but when a guy bats as hot as Brooks Elliott, you don’t mess with what’s working. And what’s working is him keeping his pants zipped and doing all of his scoring on the field.
So when I hear he’s planning to ditch his V-card now that he’s been traded to baseball’s lovable losers—aka my home team and my reason for living every March through October—I do what any rational, dedicated, obsessed fan would do.
I make a plan to stop him.
But the thing about stopping him is that it requires spending time with him.
Lots. And lots. And lots of time.
And the more time I spend with him, the more I like him. Not as the guy who’s going to help save my favorite team and finally bring home a championship ring, but as the guy who’s helping me in my quest to bring back the team’s old mascot. Who also loves making pancake and bacon sandwiches. And who would do almost anything for his love of the game.
But after all this time of jock-blocking him…do I even have a chance?
And if I do, are we both destined to a life of celibacy in the name of winning?

I'm going to be very honest here and say I was unsure about this book when I first heard about it. I mean... come on. A virgin baseball player and a superstitious girl determined to keep him that way so he doesn't ruin his game? I was certain this was going to be a miss for me. Well... I WAS WRONG.

Here's the thing. No matter how superstitious and crazy Mackenzie seems, she means well and it comes from a place of love and wanting to belong to something. And Brooks? He's just tired of following his superstitions because he was traded from his home team to the worst team in baseball.

They kind of meet (or meat.. hehe) for the first time as Mackenzie is stealing a meatball mascot costume and she ends up cockblocking Brooks. He doesn't know who she is under that costume, but she knows his secret and he wants to know how. Very funny even though you feel for him. When they meet again later the connection they have is something they can't deny, no matter how much they might want to.

What I really appreciated about these characters was when they could see each other for who they truly were; beneath the superstitions and the slightly crazy behavior, down to what was actually important. That seems deep for a rom com but I could see it.

Some of the other characters we meet before in other books, like America's Geekheart where we meet Beck and Sarah, and Liar, Liar, Hearts on Fire where we meet Tripp and Lila.

I got an advance copy of the book for my review. This book is free on KU, or currently $2.99 for its release.

Also, I want Cooper Rock's book to happen soon. I love him so much.