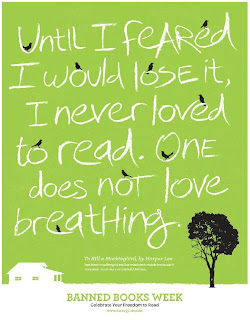 Some of these surprised me the most:

3. I Know Why the Caged Bird Sings, by Maya Angelou
5. The Adventures of Huckleberry Finn, by Mark Twain
8. Bridge to Terabithia, by Katherine Paterson

Sex, by Madonna is even lower on the list (18) than these books. According to people that are "offended" by library books, Maya Angelou, Mark Twain, and Katherine Paterson are worse than Madonna. I don't get it. I know people have the right to challenge something, but loosen up!

It's ridiculous. Are any of your favorite books on the 90-99 list?

Can we challenge the challenged books? Classic books are on these lists. Which is why, I suppose, they're classics. Catcher in the Rye, by J.D. Salinger (1951) is on both lists as a many others (To Kill a Mocking Bird; Of Mice and Men) changed they way people think and challenges us all to look inside ourselves.